In last two post I gathered the probe statistics in various scenarios. How does it impact the actual performance? I wrote some benchmarks this weekend and got useful results.

We know that hash table has O(1) amortized random read. It’s easy to tell the overall throughput in regular benchmarks. Nevertheless, it’s harder to know the performance of the worst cases: some keys has much longer probes than others. Does the performance degrade by a lot, or not so much? This is critical for applications that requires real time processing on key value look up.

In order to find the keys with potential high latency, I designed the experiments as follows: 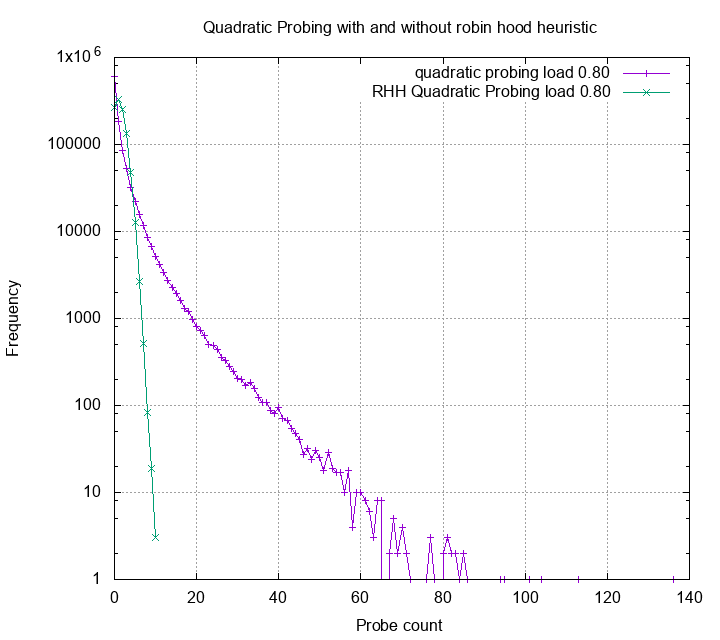 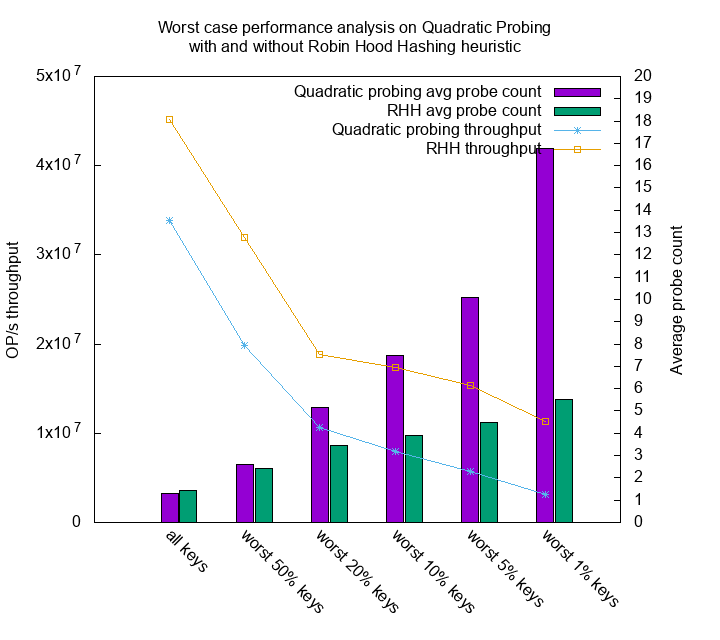 There’s another interesting observation. Although quadratic probing has smaller mean of probes compare to robin hood hashing, it’s total throughput doesn’t win. My guess is having too many large probes would cause bad cache efficiency.

For instance, all probes in robin hood hashing are within 10 probes. In this experiments I use 6 bytes for key, 1 byte for key existence marker, and 8 bytes for value. 10 probes roughly converts to 100 buckets, each of size 6 + 1 + 8 = 15 bytes. Thus the worst case it need to walk through 1500 bytes, but only very few items need to go that far. On the other hand, there’s at least 100 items having probes larger than 40 probes, which takes 24000 bytes. For such a long distance you’ll have lots of CPU cache misses. This is my best guess of why robin hood hashing overtakes quadratic probing even when the average probe count is slightly larger.

I haven’t find much discussion on hash table performance corresponding to probe distribution. My hypothesis and experiments are in early stages. If you find any similar experiments, research, or report, please leave a comment! I’d like to reach out and learn more.