Hash table is probably the most commonly used data structure in software industry. Most implementations focus on its speed instead of memory usage, yet small memory footprint has significant impact on large in-memory tables and database hash indexes.

In this post, I”ll provide a step by step guide for writing a modern hash table that optimize for both speed and memory efficiency. I’ll also give some mathematical bounds on how well the hash table could achieve, and shows how close we are to the optimal.

Let me start with a disclaimer. I now work at google, and this project (OPIC including the hash table implementation) is approved by google Invention Assignment Review Committee as my personal project. The work is done only in my spare time with my own machine and does not use and/or reference any of the google internal resources.

As mentioned earlier, most hash hash table focus on its speed, not memory usage. Consequently there’s not much benchmark compares the memory these hash table implementation consumes. Here is a very basic table for some high performance hash table I found. The input is 8 M key-value pairs; size of each key is 6 bytes and size of each value is 8 bytes. The lower bound memory usage is $(6+8)\cdot 2^{23} =$ 117MB . Memory overhead is computed as memory usage divided by the theoretical lower bound. Currently I only collect 5 hash table implementations. More to be added in future.

The metrics above actually surprises me. For example, [sparse hash map][shm] is advertised to use 4-10 bits per entry, but the overhead is actually 4 times the lower bound. If the hash table were implemented as large key-value store index, and you have 1 TB of data, you’ll need at least 4-5TB of space to hold the data. That’s not very space efficient. Can we do better?

There’s two major types of hash table, one is chaining and the other is open addressing. Chaining is quite common in most standard libraries, where the collision is handled by appending items into a linked list headed by the bucket the key is mapped to. Open addressing uses a different mechanism to handle collision: the key (and value) is inserted to another bucket if the bucket it attempt to insert is already occupied. 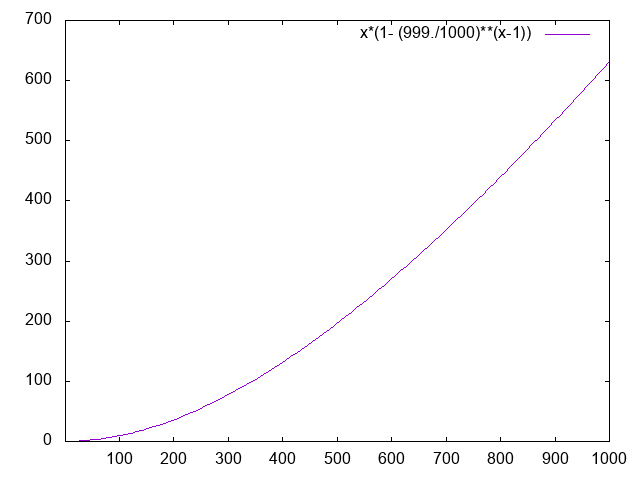 Accounting the extra payload that chaining requires, we can now compute the lower bound for the overhead under different loads.

Here I assume if the collision rate were 60%, half of it is chained and half of it fits the buckets. The actual number may have some digits off, but it doesn’t change my conclusion on choosing open addressing for hash table implementation.

In open addressing, hash collisions are resolved by probing, a search through alternative buckets until the target record is found, or some failure criteria is met. The following all belongs to some kinds of probing strategies:

For each of the probing method, we’re interested in their worst case and average case probing numbers, and is their space bound.

Linear probing can be represented as a hash function of a key and a probe number $h(k, i) = (h(k) + i) \mod N$. Similarly, quadratic probing is usually written as $h(k, i) = (h(k) + i^2) \mod N$. Both methods has worst case probing count $O(N)$, and are bounded on space usage. In other words, there no condition where we need to increase the bucket count and rehash.

Here is the algorithm copied from wikipedia. This is how the collision is handled

If the empty entry’s index j is within H-1 of entry i, place x there and return. Otherwise, find an item y whose hash value lies between i and j, but within H-1 of j. Displacing y to j creates a new empty slot closer to i. If no such item y exists, or if the bucket i already contains H items, resize and rehash the table.

This mechanism has a good worst case probing number $O(H)$. However, since it could resize the hash table, the hash table size is unbounded.

The concept for robin hood hashing is simple and clever. When a collision occur, compare the two items’ probing count, the one with larger probing number stays and the other continue to probe. Repeat until the probing item finds an empty spot. For more detailed analysis checkout the original paper. It’s worth to read.

The expected probing length is 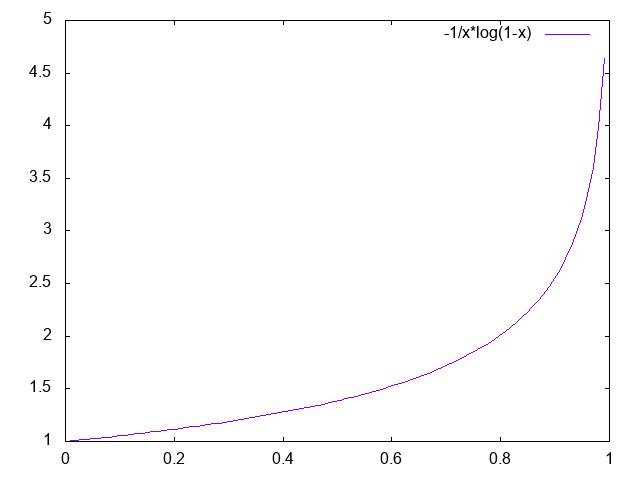 Even under a high load, we still get very good probing numbers. The best thing about robin hood hashing is it does not expand the hash table, which is important because we want to build a hash table with bounded size. This is the probing strategy I chose.

The following description is also copied from wikipedia.

The expected probing number is below 2. However, the load factor has to be below 50% to achieve good performance. For using 3 hash functions, the load can increase to 91%. Combining linear/quadratic probing with cuckoo, the load factor can go beyond 80%. (All numbers comes from wikipedia).

I implemented a robin hood hashing prototype a month ago. The prototype satisfy the low memory footprint, but hard to get it fast. The major reason is the modulo operation is very slow on most platforms. For example, on Intel Haswell the div instruction on 64bit integer can take 32-96 cycles. Almost all major hash implementation use power of 2 table size, so that the modulo is just one bitwise and operation. The problem with power of 2 table size is it scales too fast! If our data size is 1 bit above 2GB, the table must be at least 4GB, giving us 50% load. Finding a fast alternative modulo operation is critical for creating a table with high load without loosing much performance.

Professor Lemire is probably the first person that addresses this issue. He wrote a blog post that provides a fast alternative to modulo.

There’s one big problem to apply fast range on probing. Probing usually add the probe bias to lower bits of the hashed key. Modulo and bitwise and preserves the lower bits information, but fast range only use the higher bits and the probe would have no effect on the output. The first bits where it can bias the output in fast range is $\frac{2^{32}}{N}$. Hence, writing a linear probing using fast range would be:

To make the output correct we used division again, which makes it slow. Is there a better way?

I created an alternative method with a more relaxed condition. Instead of finding a fast modulo replacement for all N, I want to find some N that satisfy fast modulo and can preserve the biases of probing.

The actual algorithm is pretty simple: First, mask the hashed key to the next power of 2 boundary, then multiply it by $\frac{N}{16}, N=8..15$. This is a combination of traditional power of 2 modulo and professor Lemire’s scaling method. The difference is now the scale can only get up to 2 times. In other words, only the least significant bit will get omitted when scaling. The probing implementation can be written as:

This is the straight copy of my robin hood hash implementation. When the probe is scaled by 2 it is guaranteed to have biases on the output. The mask can be derived from leading zeros of the capacity capacity_clz, the scale is defined by the most significant 4 bits of the capacity capacity_ms4b. The capacity_ms4b is pre-computed on hash table creation or resizing time. It’s a round up of desired capacity with finer granularity compare to power of 2 tables.

I used Intel Architecture Code Analyzer to analyze the instruction throughput of my methods, and the result is very satisfying:

I hope all these analysis didn’t bored you all! Turns out these analysis are all useful. We now have a hash table with very optimal memory usage but still having great performance. 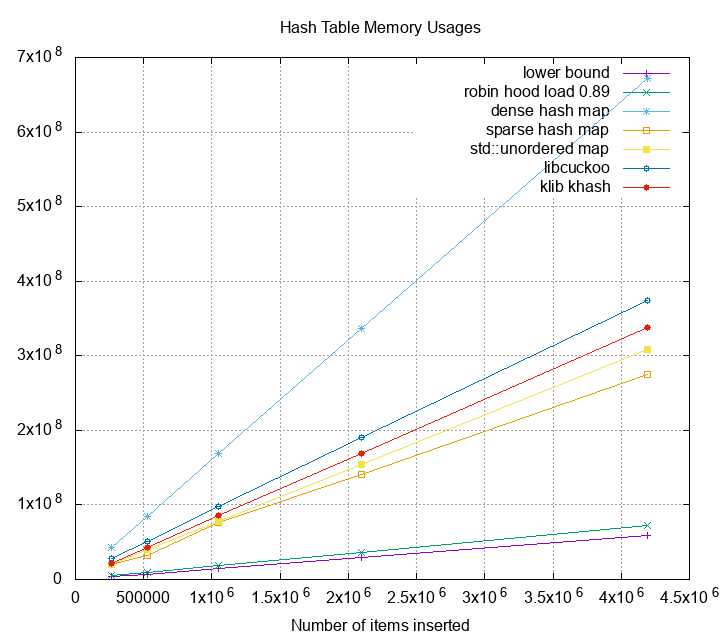 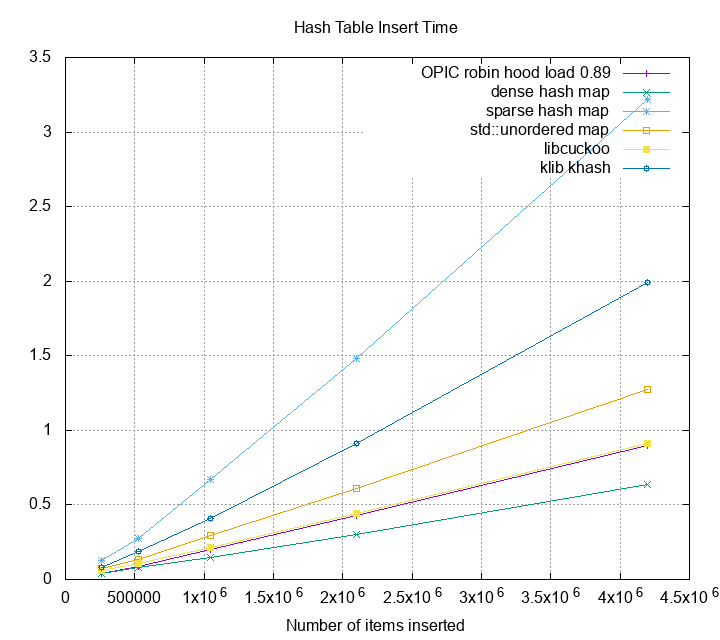 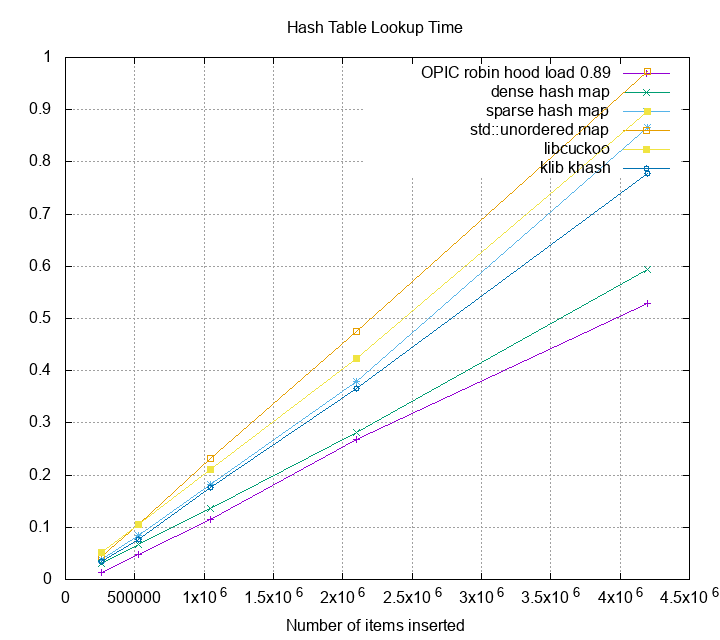 The most impressive part is the memory usage. Under load 89% we achieve overhead 1.20x ~ 1.50x. The ideal overhead should be 1.12 but we have an extra byte used per bucket to determine whether the bucket is emptied or tumbstoned.

The insertion time is not as good as dense_hash_map under high load. The reason is robin hood hashing moves the buckets around during the insert, but dense_hash_map simply probe and insert it to an empty bucket if found.

Hash table implementations has been focused on its speed over memory usages. Turns out we can sacrifice some insertion time to gain way better memory utilization, and also improve the look up time. I believe this can be the new state of the art implementation for hash tables. Let me know what you think in the comments. :)

Many details were omitted in this post, but will be discussed on my next post. Some outlines for the things I’d like to cover would be

I may not be able to cover all the above in my next post, so please put down your comment and let me know what do you want to read the most.

This robin hood hashing is implemented using my project Object Persistence In C (OPIC). OPIC is a new general serialization framework I just released. Any in-memory object created with OPIC can be serialized without knowing how it was structured. Deserializing objects from OPIC only requires one mmap syscall. That’s say, this robin hood implementation can work not only in a living process, the data it stored can be used as a key-value store after the process exits.

Right now, the throughput of OPIC robin hood hash map on small keys (6bytes) is 9M (1048576/0.115454). This is way better than most NoSQL key-value stores. The difference might come from write ahead logs or some other IO? I’m not sure why the performance gain is so huge. My next stop is to benchmark against other embedded key-value store like rocksdb, leveldb and so forth.

If you’d like to know more about robin hood hashing, here are some posts worth to read:

As people pointed out in hacker news and comment below, C++ std::string has 24 bytes overhead on small strings, so the memory comparison is not fair. I’ll conduct another set of benchmarks using integers tonight.

Also, one of the author of libcuckoo (@dga) pointed out that libcuckoo would perform better if I use thread-unsafe version. I’ll also update the benchmark with this new setup.

The short string problem brings up a question: what is the best practice to use C++ hash map with short strings? Isn’t this a common use case in daily programming? I tried to do some quick search but didn’t find any useful information, and I’m suck at C++… Any good idea on how to do this better?